One thing that I love — and hate — about living in the Northwest is this: There is always something to do. I hate this because now that we’re “living the dream” of the mom-n-pop entrepreneur, I’m regularly confined to the store, stuck at work when beer fests are happening. Sometimes the boys “cover for me,” allowing me to attend. But them trying to do the workload of 1-1/2 people never works. It simply means more work for me when I come back. When you’re running at 100%, there’s no 50% more in reserve. There’s no covering, only shifted and delayed workload.

I admit, I do eye the festival times and think, “But the festival runs late on Saturday, so I could rush there after work.” Really? Who am I kidding. After a long day on my feet, all I want to do is go home, kick my feet up, have dinner, rub my dog’s belly, and fall asleep with the TV on.

This fall’s events I want to attend and why:

The Parkway’s annual IPA Fest is this weekend. Last year I drank with the Wench and a bunch of other IPA-lover-locals at this fest. It was Sunday eve with many IPAs on tap, the air was cool and the sun was out (kinda like today’s weather). Ashley impressed the guys with her ability to identify hops & hop blends as she drank, even going so-far as to say when the hops were added during the brewing process. Well, maybe she didn’t impress all the guys, but she impressed me. This gal knows beer. An impromptu game of outdoor beer-table-top ping pong (the paddles and balls, I have), and many laughs over a handful of beers, plus a bit of pubfood to soak it all up. I really love the Parkway. It’s in an old house in Tacoma that’s been used as a tavern for over 75 years; a neighborhood gem for great craft beer — and most folk who drink there seem pretty cool.

Check out the IPAs being served at this year’s fest. 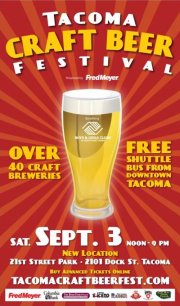 Expected to differ from last year’s fest, TCBF is again on New Tacoma’s waterfront but has changed location to the 21st Street Park on Dock Street. It’s twice the size of last year’s venue so there’s ease of moving around. Plan for an outdoor event dotted with canopies of delicious craft beer and festival food. Die-hard Northwestern beer drinkers will attend despite what Steve Pool brings for weather; we beer drinkers wear hats, protecting from both rain and sun. This festival is organized by beer lovers in Tacoma, with Fred Meyer as main promoter. The proceeds help local youth in the Boys & Girls Club.

This year the festival is Saturday only, September 3, 2011.

Last year it ran two days to accommodate the Mc-beer-lovin’ crowd, so I was able to hang out Friday eve to try all kinds of local and locally available craft beer. I’m hoping next year they add a second day… (…preferably Sunday, my day off!)

Expect a good assortment of craft beer, friendly folk, a short bucket line, tables with a few local beery businesses (I so wish I had time to set one up) and games. Brewers and brewery reps are there, so you can actually meet and visit with people who know their beer. There’s also a free shuttle bus from downtown Tacoma to the park. Bring extra cash for more beer tokens and food. If they have the same BBQ stand as last year, be sure to check that out.