Should I seek out discounted beer? 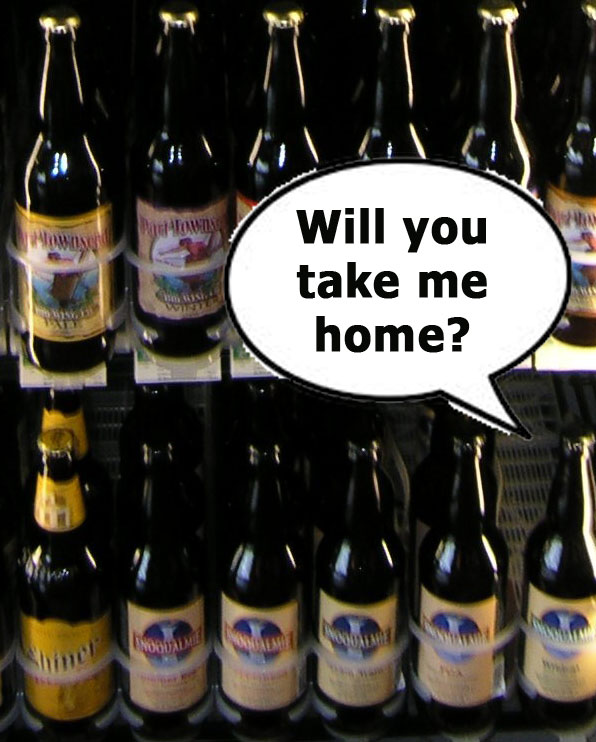 The Beer & Whiskey Brothers blog called them out, saying:

“Hold on a minute, Mr. SaveOnBeer guy. You said “simply not true” when you should have said ‘overwhelmingly correct.’ If 25% of craft beer buyers are price sensitive, that means that 75% of craft beer buyers do indeed have a ‘spare no expense, find me the best’ attitude. If this were an election, that would be a landslide.”

“Anyway, I found it funny that this press release so blatantly bends the truth right there in the first two paragraphs, especially when you consider that the survey happened on SaveOnBrew.com, a website dedicated to thrifty beer buyers. If only 25% of THAT audience cares about price, what do you think that statistic would look like on BeerAdvocate or Rate Beer?”

Yep. I agree. It seems there’s an attempt to skew numbers in the favor of their site. However, let’s take a closer look at the beers and businesses they’re promoting. 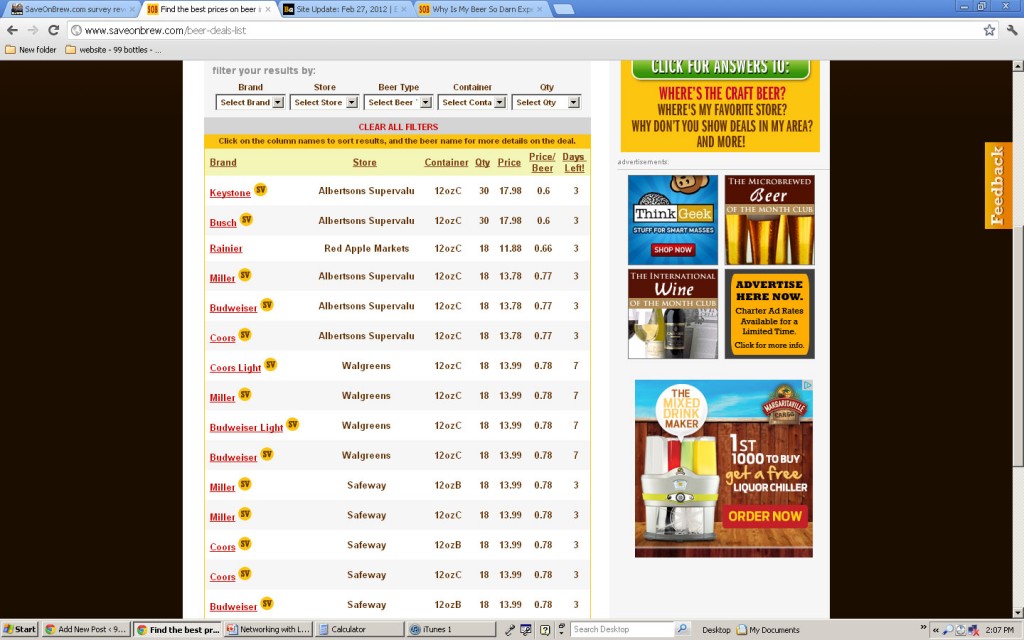 The results? Budweiser – Miller/Coors (BMC) and Corona at area grocery superstores: Albertsons SuperValu, Walgreens, Safeway, Red Apple Markets. I also have the ability to sort by brand, with a few craft choices: Alaskan, Deschutes, New Belgium, Widmer, plus one Full Sail option (Session Lager). Well, I understand that. Yes, it is true: BMC drinkers are often after a bargain. I’ve had many tell me, as they stand at the front of my store while their friends are shopping for craft beer, “That stuff is just too rich for my pocketbook. I’m not even going to look as I’ll be sure to get hooked.”

This web service, for craft beer drinkers? I’m not convinced.

Granted, I own a small specialty beer shop and always quiver a little when the ladies from the local ValuPak stop in to try to sell me on advertising in their blue envelopes. I’m not out to cater to bargain shoppers; we get enough questions like, “So all the beer here is 99-cents?” simply due to people who aren’t familiar with the song on which our store’s name is based.

Why don’t I focus on selling discounted beer? My aim is to sell delicious beer, to act as a steward of the beer while it’s with me, and get people into beers they’ll enjoy. I’m not out to price gouge; my aim is to charge a fair retail price that’ll allow my business to remain viable, retain customers, and allow me to live a modest life. We certainly don’t charge as high as some retail establishments, but we also can’t survive on warehouse markups. 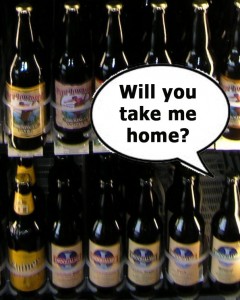 Sure, there is beer that we discount on occasion…

A bottle or two left in the door, with no other backstock on hand, gets pulled and put into a 15% off box. This isn’t because the beer is old or bad. It’s because we want to keep the store looking fully stocked and get something else in the door. It’s weird, but a lot of times folks will leave one bottle in the door rather than buy it. I find this phenomena strange, that a bottle will sit there, waiting. Waiting. Waiting. Waiting for someone to buy it. A search on “Why will customers not buy the last item from the shelf?” reveals one result. And it’s on a hockey forum of all places…LOL! Anyway, I’ve digressed. So, there is our discount items: “Onesies” that people are afraid to buy, even though the majority of our beer is sold by the individual bottle. And we have several customers who focus on the “Onesie Board” on their visits, finding really special gems that they may not have otherwise tried. It’s a regular grab-bag of fun beer!

As for the “on sale” tags, we mark-down seasonal non-cellarable beer toward the end of its season; beer does no one good once its expiration date hits. There are also savings granted to us by our suppliers passed on to our customers. We never discount beer just to draw-in customers.

I look at the discounted items in the chain-grocery stores. The ad specials are there to attract and draw-in customers. Some offers are based on contracts with their suppliers. I look at their discounted beer. I check the dates. There I see both discounted and regular priced beer that I wouldn’t buy. I consider how it’s stored, directly under fluorescent lighting. I think about the marketing strategies of chain stores. And I also think about the advice regularly given to entrepreneurs: Avoid discounting. Harvard Business Review says,

…in our interviews, we encountered startups who regretted offering big discounts to achieve a first sale. Doing so can set a pattern, diminish the long-term value of a product or service, or hurt cash flow (if the sale results in a loss). Companies talk, and if you sell to one industry player at a very low price, you can expect future customers to hear about it and push hard for a similar deal.

I agree with this.

A specialty store isn’t a discount house, unless it’s specialty is discounting. Discount shoppers aren’t necessarily the focus of specialty stores with handcraft products. Unless you’re selling items from Nepal, Bali or Pingyao, according to Google. And most good craft beer is just that… crafted by hand, not in factories.

So, should you seek out discounted beer? Well, I guess that’s up to you. Personally, I’m not convinced by SaveOnBrew.com’s philosophy of “What’s better than beer? CHEAP BEER!”

3 thoughts on “Should I seek out discounted beer?”