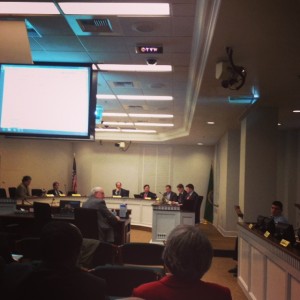 Today I went to Olympia to testify before the Washington State Government & Accountability Committee, of which Representative Christopher Hurst is chair. I live in Rep. Hurst’s district, and I was there in support of SSB 5731, which would allow Specialty Beer/Wine Stores to sell craft distilled spirits.

I was optimistic going in, as SSB 5731 has already overwhelmingly passed the Senate (43 Yea, 4 Nay), but felt it necessary to attend and give testimony as this bill could ultimately mean life or death for Specialty Beer/Wine Stores like mine.

A little background…
Seven years ago my husband and I quit our full-time jobs and embarked on a new journey as entrepreneurs. We opened a little Specialty Beer Store just nine miles from home, over in Federal Way. It is called 99 Bottles. There we have had the joy of sharing our passion of craft beer with others, selling local, import and American beers.

Two years ago voters approved 1183 to privatize liquor sales in Washington State. Since that time, sales margins have started to go downhill…

We look at options for diversification. Our first choice would be to bring in craft spirits. Our dream was always to run a specialty alcohol store, not a tavern. But the law, as is, won’t allow us to bring in spirits. Why?

Approval of 1183 made Washington State Law state that to sell liquor a store must be 10,000-square feet or larger, be a former state store or meet another criteria which we do not.

Flash-forward two years: 60% of the former state liquor stores have gone out of business. National corporate chains BevMo and Total Wine & More are taking advantage of Washington Liquor Laws written in their favor. We fight against these billion-dollar corporate liquor chains for customers…in beer sales only.

Neighborhood wine stores such as Corky Cellars (Des Moines, our “inspiration” for our business idea) and The Grape Adventure (Kent) are unable to branch into craft spirits to bridge the gap of income needed to operate and go out of business. Other neighborhood beer and wine stores see margins decrease, decrease, decrease… including my beers store and wine shops like Western Washington’s #1 Wine Store: The Wine Alley.

The law, as written, clearly gives advantage to corporations.
(Like they need to be given more advantages.)

As a small business, we are unable to compete on a fair playing ground — unable to carry craft spirits — because of our “lack of square footage,” we seek support of our legislators to revise the law. We would like to be able to carry spirits produced by small Washington craft distilleries, by distilleries who produce such small volume that they don’t produce enough to be sold in mega-stores. We want to be able to carry craft spirits that are produced by craft breweries who also distill.

Why does the law give favor to a big business?

1183 was originally written for big business, by big business, and to give former state liquor stores a fighting chance. It’s been 1-1/2 years since liquor sales became privatized in Washington State and the outcome is this:

(1) Over 60% of the former state liquor stores have gone out of business, unable to compete. Most remaining have converted into convenience stores (“C-stores”), even though our State Legislators were opposed to C-stores selling liquor as they have the highest incidence of selling to minors. We are told by these owners they are still doing their part in checking IDs, selling legally and preventing theft.

(2) Favor continues to be given to corporations. In Washington State we traded State-run liquor sales not for “privatization” but for “corporatization” — with small, independent, local Specialty Beer/Wine Stores not even given the same opportunity to sell craft spirits.

Today I sat and listened to the owners of small liquor stores give testimony on a bill that would decrease their liquor licensing fees from 17% to 7%. It was clear their testimony, though on a different bill, had great affect on the bill that would give my business equal playing ground to corporate chains. Their testimony was filled with tears, the minority owner business card, and begging/pleading. Rep. Hurst repeatedly expressed his sympathies to these fellow small business owners, even walking out to the public seating area, shaking their hands.

As this progressed, I became worried for our bill.

SSB 5731 is about small business vs. corporatization.

But I felt like Rep. Hurst made it that way. Did he shake my hand? No. And I’m one of his constituents. I live in his district. I voted for him in the last election. But does he care about my small business? No. He’d rather bet on the failing business, of the business who just testified they cannot pay their alcohol licensing fees. He’d rather not look out for my small business, in fear that he’ll undo the sympathies he’s just expressed.

I can’t help but see Rep. Hurst is caught up in the drama of the small liquor stores. He is ignoring other small business. Yes, I also sympathize with these business owners, they poured their heart and soul into their businesses. The former contract store owners opened their businesses from scratch, like me. Others, however, purchased former state stores in effort to get rich. One fellow said that he paid $85K for his former state liquor store — hell, that’s a third of what we paid to build out and open our business. We’ve also worked hard and deserve a chance to make this business thrive, to have an equal selling ground against the mega liquor corps.

So I come back to 1183. What this bill did was give advantage to to big business. Now businesses like mine, like my friend Allison’s, like these small liquor shop owners, are being pushed out by Total Wine & More and other big corporate businesses. Unless the State Legislature helps us by leveling the playing field, we’re likely to go out of business as have other specialty wine shops, other small liquor stores — but we can’t. We have to make it work. We have three more years on this lease/location. This was my dream. I love craft beer. I love craft spirits. I want to share this all with the public who also appreciates these wonderful products. I want to operate this small business. I want to share my passions.

But there it is: You must be 10,000-square feet or larger to sell spirits.

Why do we still have this square footage requirement in the law? Why is MY Representative requiring this requirement to stay in place? It’s time for our legislators to pay more attention to us small business owners and less time to big corporate America and high-paid lobbyists. We need someone who respects us, works for us, and will watch our backs.

All this requirement is doing is giving advantage to mega liquor corporations, putting our neighborhood shops out of business. All we are asking for, as small businesses selling specialty beer/wine, is to have a fair playing field: The ability to sell craft spirits.

So, today I gave my first testimony ever before our State Legislators. I was so nervous! A change like this could mean life or death to my business.

The result of today’s hearing:

Representative Hurst says, “This is not Prime Time.”

So, basically he feels my livelihood is worth nothing.

He would rather continue to give advantage to big business.

However, the committee didn’t kill SSB 5731 entirely. The chairman simply refused to take vote on it. He doesn’t care that the Senate OVERWHELMINGLY voted in favor of this bill. He is holding it hostage and refuses to take committee vote. By doing this, he is demonstrating that he prefers to keep the playing field in advantage of mega-billion-dollar corporations.

As chairman of the committee, it is only Representative Hurst who can call for a vote. We should be dignified of a vote, even if a majority is in opposition. Let the records show the Yeas and Nays. Without a vote, there is no public record.

So, dear friends, I don’t know who else to reach out to. Can you help me make this “PRIME TIME”? The livelihoods of small business owners depend on making a fair playing ground. All we are asking for is a chance to sell craft distilled spirits, to support other small Washington businesses, to give our customers a chance to support small businesses by buying small from small.

This bill is still alive. It’s just being held hostage. If Rep. Hurst doesn’t revive SSB 5731 in the interest of small businesses, this hope will die on Friday, February 28, 2014.