Where are the Mac & Jack’s bottles? 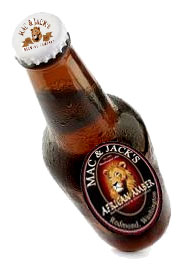 “Do you have Mac & Jack’s?” is a question we hear daily at the store. My typical response, “We can get you kegs of Mac & Jack’s beers, but they don’t bottle.”

I’m surprised at the handful of people who attempt to argue with me that Mac & Jack’s Brewery offers bottled beer and that I am an idiot for not realizing that the local [insert grocery store name here] carries their African Amber. Sorry, dude, you are clearly wrong. You are simply attempting to argue a point that is simply untrue.

You won’t find their beer here or anywhere else in bottles — unless you’re referring to growler fills that you can get at the brewery or at taverns. But I know that’s not the case as you’re talking about six-packs and grocery stores.

I don’t know what beer you think you saw at the big-box grocery chain, but it wasn’t Mac & Jack’s African Amber. I sigh and let the person rant on.

Contact your Washington State Legislator and ask them to vote YES ON HB 1465.

HB 1465 will allow beer stores like ours to package growlers to-go of beers that are currently only available in keg format. Yes, this means that we would be able to package Mac & Jack’s African Amber for you to enjoy at home.

p.s. And if you think this picture of Mac & Jack’s African Amber is real, you’re sadly mistaken. 😉

2 thoughts on “Where are the Mac & Jack’s bottles?”