Pour me another Le Terroir 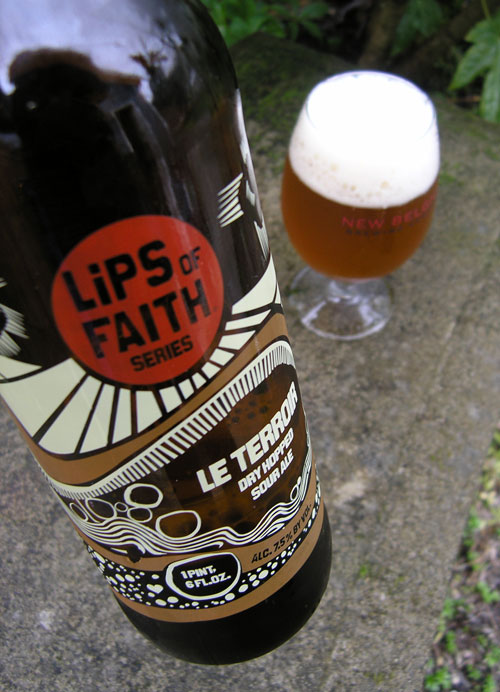 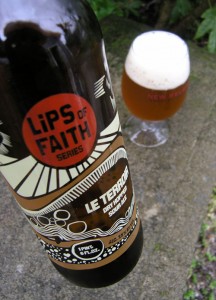 Place your mouth to the rim of the glass. Breathe in deeply, with lips slightly parted, to draw the dry hopped aromatics into your mouth.

At first sip, the tongue is awakened by lively tart and tangy tropical fruits and dank floral hops.

I want to drink it fast because it tastes so good, but I also want to savor the fruity goodness.

According to New Belgium Brewing,

“Le Terroir is a French term meaning Of the Earth. Used to reference the environmental conditional that affect the brew, we like to think about the terroir of our foeders. These wooden barrels age our sour beer in varying temperatures, humidity and vibrations. The terroir of New Belgium, so to speak. Add in another variable by dry-hopping with peachy, mango-like Amarillo hops, and we created a beer that changes every time we brew it.”

Do I like it? Well, this is the second 22-ounce bottle I’ve kept to myself in the past three days. And, yes, I always feel a tinge of guilt when pulling limited-release bottles for myself rather than offering them for sale to customers. But by the time I polish off this bottle, that guilt will be gone. Next I’ll be suckering the boys to split a bottle with me — so they can sample the goodness — just so I can have it a third time. 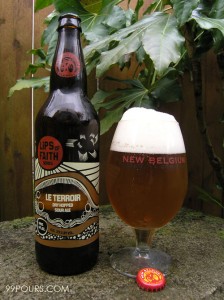 This beer is classified as rotating release, which means it’s available whenever the brewery has completed a batch to release. It’s a sour beer that’s been barrel-aged for two years, followed by eight days of dry-hopping with Amarillo and Cascade hops.

(That is, availability could be every couple of years, so don’t delay if you’re looking to get yourself a bottle. This beer is on bottle shop shelves now.)

The facts—
ABV – 7.5%
Calories – 200 (I can’t help but wonder if that’s per serving or per bottle; either way, it’s not too many! Especially since I’ve just completed another hour of Zumba!)
Malts – Pale, Wheat, Caramel-80, Carapils, Oats
Hops – Target; dry-hopping with Amarillo and Cascade
OG – 16.5

Pour me another, please!