Reunited, and the beer’s so good. 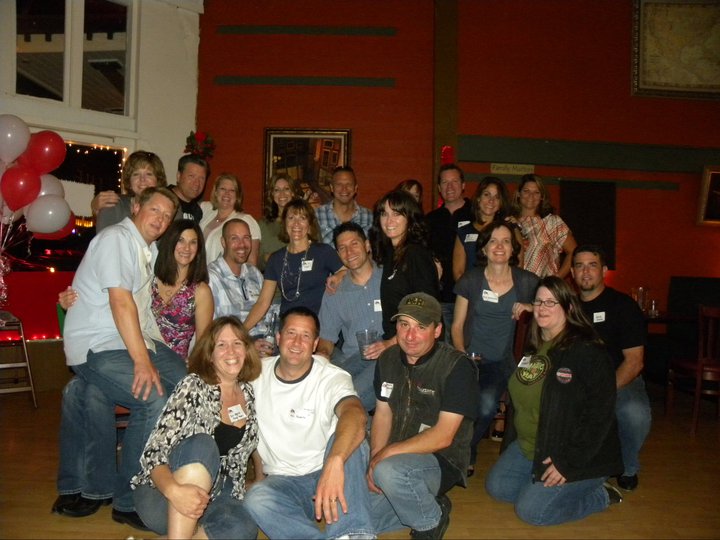 I edge up to the taps and order an ‘African Amber.’ That’s the American amber style ale from Mac & Jack’s Brewery that’ll be flowing into this plastic party cup at this 25th high school reunion.

“The 25th high school reunion,” was the major topic in my weekend. But having a store can make timing things difficult, so Saturday night the plan was to sell beer from 10AM ‘til 8PM, followed by closing duties and heading up to Snohomish for an informal adult reunion. C was cool enough to do the closing duties so I could head off earlier, arriving before dark fell. So there I was, dressed in beer t-shirt, jeans and sneakers heading off. 49 minutes later I arrive at the Pizza Palace Cafe in my hometown of Snohomish.

At the entrance, former classmates stood. Some heading away; they’d been there around two hours already. I say hellos and good-byes. My stomach, growling, urges me inside toward the pizza & beer. (My last meal: Breakfast at 8:30AM.) More hellos, reuniting with and meeting: 6th grade first slumber party friend, schoolmate I never spoke to, girl who was always nice to everyone, preschool boyfriend and his wife of 17 years,…

An event organizer apologizes for not having better beer. “What’s on?” I ask. “Coors. Mac & Jack’s.” The African Amber, that’ll do just fine. A solid craft beer, and it’s been a while… too long. Certainly, no beer apologies are needed for this reunion.

I edge up to the taps and order an African Amber. Because I know that’s the amber ale from Mac & Jack’s Brewery the bartender will be flowing into that plastic party cup. I also notice there’s Diamond Knot on tap. (My next beer: Diamond Knot IPA. Twice over.)

This night’s about chit-chat, about reuniting. But who’s here to reunite with if most are people I’ve not united with in the first place? Strange how, for me, few were reunites from high school — most of my reunites here were with those I first met in elementary school.

But I found it confirming. The social pecking of the schoolyard is bullshit. Groups, and their groupies, live on. In social situations I am often most comfortable taking the role of observant, rather than participant. And these things are all okay. The feeling of (…loss? …guilt?) that’d been riding around in me for missing the 10 and 20 year reunions vanished, leaving me content.

It’s now 10:31 and I’m feeling good to-go, but still want to stay out. Sister to the rescue! She’s bored. Cool. I message her that I’d like to go to Fred’s Tavern. I’ve heard so much about Fred’s beer selection from Snohomish guys who’ve stopped at our store. I’m thinking she’ll be there in 20. An hour later sister walks in. Introductions and good-byes to the three I’m standing with. And a half-block down and over to Fred’s. I’m in the mood for a Flanders Sour; if their selection is as good as the locals say…

We sit down, ask for a beer menu. “Mac & Jack’s, New Belgium, Alaskan, Deschutes — Hop in the Dark, nice. Obsidian, on nitro, also nice — Chimay White, Lindemans Framboise,…” No sours. I guess the beer tastes of Snohomish haven’t evolved to that point yet, but Fred’s does have solid offerings.

My sister orders a Wandering Aengus Cherry Cider and I order “the nitro Deschutes Obsidian, with Lindemans Framboise floating.” I figure the raspberry sweetness of the lambic will lay nicely on that velvet bed of luxurious, balanced stout. And it may quench my thirst for sour. I am right on the first count. I push it to my sister, and say “Try.” Her response, “Mmmm…that’s good.” And, “I didn’t know you could mix beers.” Good times at Fred’s: Reuniting with sister, and two old beer friends in a glass.

Next up: Over to the Collectors Choice Restaurant, or “the CCR” as locals call it. On tap: Mac & Jack’s, Diamond Knot, a couple more decent craft beer choices, plus some posers like Shock Top. We order “two Mac & Jack’s” (African Ambers) and grab a table. The long day is catching up with me. My eyes are getting droopy. The band plays last song and packs it up. It’s now 1:30AM: Half-hour ‘til drinks are pulled, we swallow the last amber goodness, hit the restroom, and head out.

1:38AM: Arrival at Mardini’s. Three people sitting in the courtyard, the bar’s already got all the chairs up, everyone gone. We duck into the restroom, pieces of toilet paper spotted all around the floor, sister reminds me to “check for dragging paper from your shoes,” while briefly recalling an embarrassing situation. And off we went, so I could reunite with a Sanctification that I’d brought along to share as a nightcap.

All in all, the reunites of the evening were good.