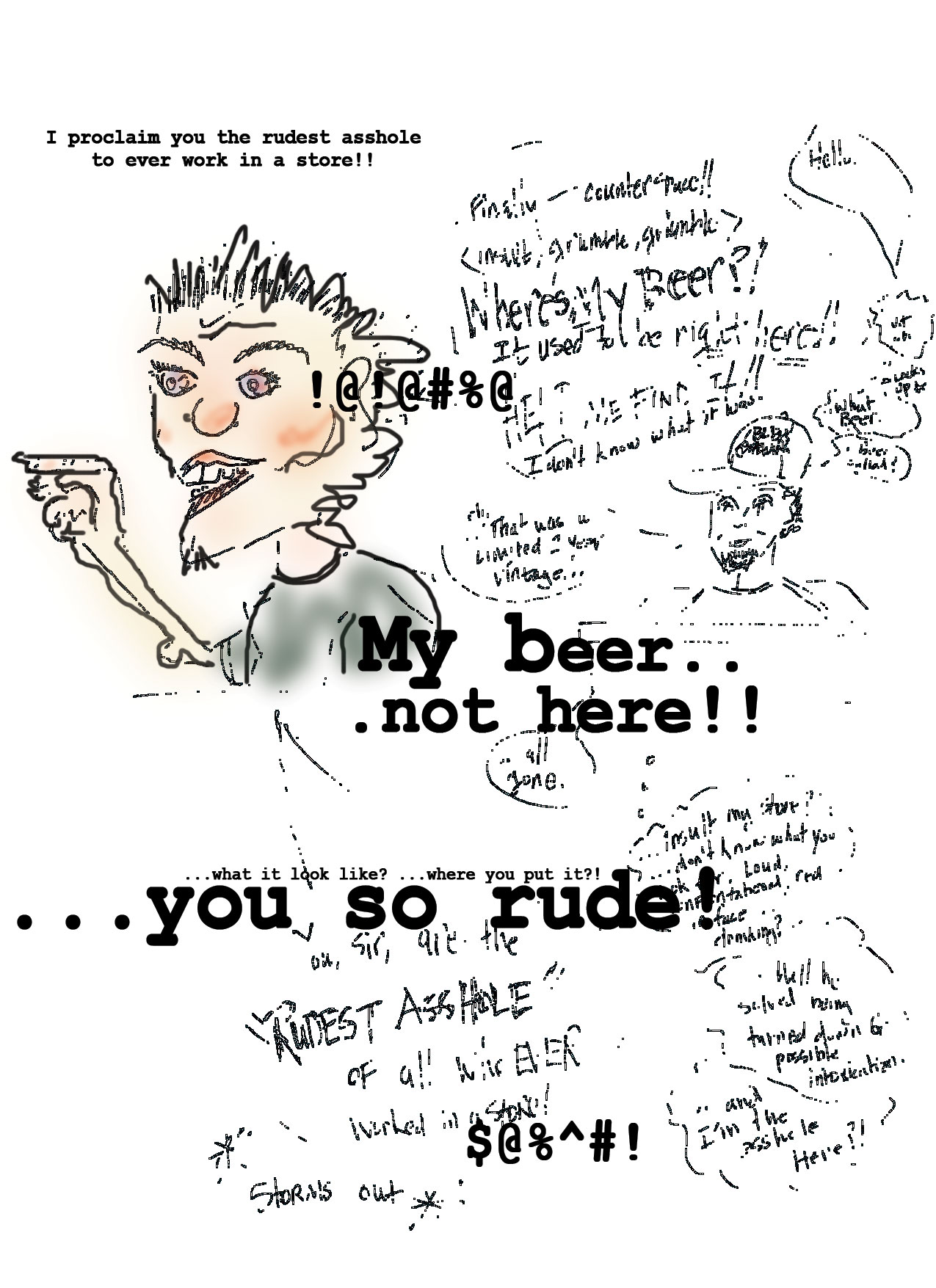 “You really don’t make running a store look appealing,” says a friend on facebook. This is after a week of sporadic posts on my facebook wall, sharing things that people do and say when visiting my store. And the funniest part, I didn’t even share some of the craziest stories…yet.

His comment, following my post: “Weirdness. Just witnessed a customer repackage his 2 bottles, from costing me $0.03 cents in bag to $0.53 to switch ’em into a carrier, wadding up the bag into one of the carrier holes.” I appreciate the banter that follows such posts, things like:

This camraderie gives me a release. It’s like therapy. Pre-beer therapy. How a little “beerapy” would take the edge off. But, alas, I am not even a full hour into a 10-hour customer-facing work day, so the beer will have to wait.

Earlier wallposts of the week included: “Q of the day, ‘Don’t you have any normal beer?’” and “Asshole of the day goes to the guy who just spit chew into my can next to the cider cooler.” (Note to shopper, any biohazards and/or food waste that you bring into a business should leave the business with you. There are trash cans outside of businesses for disposal of such items.)

I had neglected to share other stories on my wall, such as helping the woman find the “can” of Steinlager on the 2nd shelf of Door #9 when there is only one “can” on that shelf. This process took nearly three minutes.

The repeated, “I see the wine store next-door closed. How is your business?” question from naysayers. (You can identify those of negative spirit from the true well-wishers by tone of voice. Also their subsequent hushed anti-beer rhetoric travels across the store to my ears, clearly conveying an ill-wished intent behind their questioning of my store’s ability to remain in business. “Good customer service” dictates that I am supposed to put on a happy face, pretending I don’t hear their negative speech, but some days I just want to speak out. I try to quell my inner urge. I struggle with such negativity entering my place of business and solitude.) 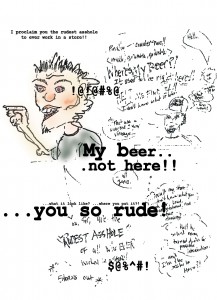 The beligerant red-faced man criticizing our store upon entering. Who then proceeds to the back shelf to look for his “favorite beer” — a beer that he doesn’t know the name of. He points at the shelf, “It used to be right HERE!?” Once C figures out what the guy is talking about, relates “That was a 2-1/2 year vintage…a limited release.” that the man had been drinking. And like all limited releases, when it’s gone… The man, exhibiting two characteristics of intoxification, proclaims C the “rudest asshole to ever work in a store” and storms out. On the bright side, that’s one less possible drunk to which we’d likely have to refuse sale, had he wanted to make a purchase.

My “Calgon, Take Me Away” moment of the evening that night: Allagash Curieux.

Some nights it takes a special beer to make things better. Only certain beers can take away the sting of criticism and frustration. At 11%, Curieux is one of these beers.

If you’re not familiar with Curieux, Allagash Brewing makes a delicious Belgian-style Tripel… (Tripel is a strong golden beer. The style has lightly sweet malts, its alcohol flavors are perfumey and honey-like, and its byproducts of fermentation create a spiciness that can be reminiscent of cloves and fruits like orange, citrus, apricot, pear.) …and they take that Tripel and put it in Bourbon barrels for two months, that bourbon-aged beer is then blended back in with more Tripel. This is how Curieux comes to be. And it is my choice for tonight’s beerapy. 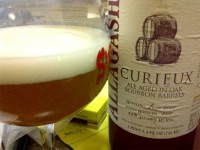 “Curieux was our first foray into barrel aging. Curieux is made by aging our Tripel Ale in Jim Beam bourbon barrels for eight weeks in our cold cellars. The aged beer is then blended back with a portion of fresh Tripel. The resulting beer is soft with coconut and vanilla notes, with hints of bourbon.”

This bottle, packaged in June 2011, is still young. The bourbon is strong in this one. Not all batches have this strong of presence. The head, soft and pillowy. I look at it and admire how “soft” it looks, like a bed I would like to lie on…only I would sink right through that softness into the wet, sweet, slightly sticky fluid beneath. Sweet honey notes, vanilla, bourbon, a hint of clove. A slight effervescence pushing outward. Damn, this is one fine beer. I want to whisper, “I will miss you, Curieux.”

I may just have to get a few bottles of Curieux before it’s gone.