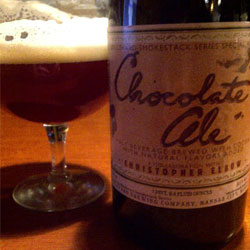 I’m a religious watcher of Google News: Beer, so first learned of this beer in the days leading up to Valentine’s as headlines read:

Kansas City Star – Sarah Benson – ‎Feb 10, 2011‎
Matt Wiggins wasn’t sure if he wanted to say how many bottles of Boulevard’s new Chocolate Ale were in his fridge. Wiggins, a 28-year-old from Fairway, didn’t want anyone to get jealous, or hate him, or accuse him of hogging an unfair…

Rare Chocolate Ale Made In KC

fox4kc.com – ‎Feb 11, 2011‎
What happens when you mix Kansas City’s most popular local microbrew with the city’s most coveted chocolate? You get a beer so popular that stores couldn’t keep it in the stock for more than a couple of hours. Boulevard’s collaboration with Kansas City…

So when Craig told me he was getting 3 cases for the store, my reply was, “Really? Can you get more?!” but as it was already tight week for ordering beer, with 5 cases each of the 12oz corked-n-caged Russian River beers for our rock-bottom sale (yes, I realize we’re devaluing incredible handcraft barrel-aged beer), he said he was firm on sticking to just 3 cases of the Chocolate Ale on our order. I am praying there will be more for us to order next week, but really doubt it unless both Craig and our sales guy lock it in first thing Monday morning…and if the distributor will sell us more. Boulevard Chocolate Ale has been in the store just one day and we’e already down to just 2 cases. Folks from the store’s facebook fan page bought from case #1. One customer even mentioned the articles as, like me, he follows Google News: Beer. Anyway, now I have digressed from the pour at hand!

Last night we split a bottle of Boulevard Chocolate Ale. I was a good two feet away from the bottle when the cork was removed, but the cocoa aroma wafted right to me. Wow. Smells nice. Craig filled my beer goblet with a generous pour. The crisp airy head smelled and tasted of cocoa. The taste: Cocoa Pebbles. A little cereal grain, sweet cocoa, a bitterness toward the finish that increased as the beer warmed.

Dennis didn’t winch like I expected (he’s not a chocolate fan — I can’t imagine depising chocolate so much that your face involuntarily scrunches into the dislike position), but he ended up downing it like a shot when the cocoa flavors started to emerge.

Craig said, “I could drink an entire bottle.” I agreed. Despite it’s alcohol by volume of 9.1%, the beer’s weight, texture and flavor disguise it as sessionable. A very dangerous thing. One 25.4oz bottle could put you on your lips, but drinking too fast and reaching for another would certainly result in delayed, if not immediate, misery. He continued, “…unlike Choklat.” My reply? “Oh, I can drink an entire bottle of Choklat, though it takes me all day. But this, Boulevard Chocolate Ale, I could drink in just an evening.”

The verdict: Pour me another, please.

Oh, and I should probably mention, if you don’t hurry out to get a bottle of Chocolate Ale, put a note on your calendar in February 2012 to watch for its arrival announcement. For chocolate and cocoa fans, it’s a beer worth more than its $10 tag…and Boulevard Brewing has already announced they’ll brew it again — next year.