MM: Beer Wars (on so many levels) 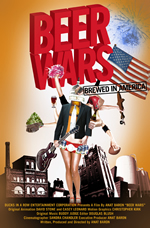 I keep things. They’re like little bits of memories all over the place, stuffed in drawers and boxes and in the bottom of my purse. This morning I was clearing out an old box of papers and came across these:

…and it was playing LIVE! in theatres across America.
One night only!

A documentary about CRAFT BEER playing in theatres across America?!
And I’m talking in major corporate theatres, in the land of corporate mass-produced fizzy lagers. This was going to be history, baby!

I was excited to see this movie. I watched the trailer multiple times and read everything I found online about the movie, so I’d be prepared to spread the word, to share the movie with beer lovers.

As co-owner of an independent beer store, I imagined a joint event with a theatre participating in the event, so I checked the locations of nearby showings.

My first contact: The theatre in the same city as our beer shop. I proposed a joint-promo. As part of a corporate chain, the manager’s immediate response: “No. Corporate drives promotions.” The Super Mall, nine miles from the store, also showing Beer Wars live, so I called them. They also cited needing “corporate approval.”

I attempt to maneuver thru layers of “bureaucrazy” at a mega movie theatre chains.

Getting nowhere, I go so far as to contact the movie’s maker, Anat Baron, for advice. After consulting with her, I called back to both locations. This time, the manager at the Super Mall got the okay to the “joint deal” I proposed.

The deal: No work, headache or hassle for the theatre, just me giving them free promotion for this showing in exchange to give away gift bags to those in attendance.

At big movie events, it’s usually the actors who get the bags, but here, this night, I wanted the bags to go to the important people — The people who support craft beer, THE CRAFT BEER LOVER.

Though I really wanted to bring in local craft beer samples to pour for everyone in the Beer Wars Live auditorium, our State’s Liquor Laws prevent me from providing or selling beer outside of my shop. So, goodie bags filled with non-alcoholic items would have to do. And I was really excited to give these to those share our love and passion for craft beer.

After confirming with the theatre, I spent a several weeks visiting with several beer distributor and breweries to get (buy) items to include in the bags, assembled them and prepared them for our staff to go hand them out at the event. I also continually put the word out about the movie playing at their location: Social media, handout flyers, store newsletter, hanging posters, talking it up.

I was really looking forward to this night.

Sent our girl in early, armed with boxes of gift bags, to present to each person in attendance.

We followed up later, having to stay a bit later to close the shop. Finally we get to the theatre, get our popcorn and into our seats. About thirty-five present, not what I’d hoped for — at least 50. (I’d told so many people!) But I was feeling happy to be there. Not only was this big for craft beer, but this was the first movie Craig and I had been to in, I don’t know how long. …three years?

Local commercials, the obligatory “turn your cellphone off” appear on screen.

I felt tears well up. I swallowed hard. Try to forget what this guy just said. I gotta keep promoting craft beer and my store to the best of my ability. Try not to let guys like this bring me down, lead to inactivity and depression. Keep fighting. If you’re a small businessman you’re an island in the stream. Not only do you have big corporate chains with the ability to out-buy, out-advertise, and off-lay for lower prices, but there are normal guys out there just slamming your business. Guys like this hating on you, on your shop…

…even after you gave him, what you thought was, a nice gift bag.

This shout-out for no apparent reason, other than, perhaps, that being a dick to a small business owner is supposed to be a way to impress your friends. I swallow back the tears. Finally, the movie comes on. I manage to push all this to the back of my head and enjoy the movie. This, a memorable moment (MM) in my beer lifestyle: Attending Beer Wars Live.

As the movie progressed, my attitude changed from sadness, to empowerment. “This is ground warefare. It’s about the consumer.” and getting them REAL BEER. This is what BEER WARS is all about: Staying strong and pushing forward for your love of craft beer, despite the haters.

Putting these in the recycle bin.