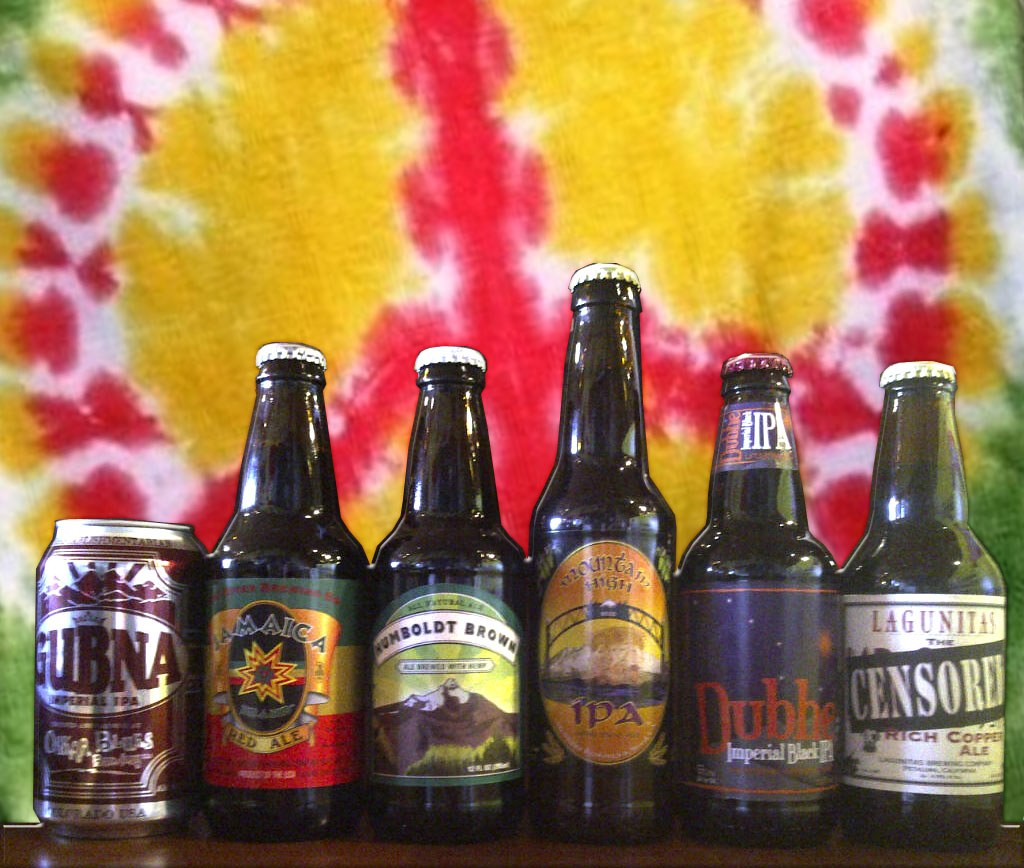 There’s a 6-pack out there for everyone. Really, there is. Though it may take a bit of thought and looking around to identify the right beers, it can be done. 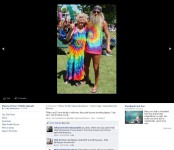 This pack was inspired by the April Fools Day photo that C put on his facebook page. I was the only one alarmed at C’s lack of pants; everyone else focused on who gets all the beer.

The stereotype: Hippies are laid back, relaxed folks who don’t mind wearing a flash of color — especially in tye-dye form. My early 70s childhood experience taught me that hardcore hippies may even dye their shirts in natural things, like berries. Hippies are self confident, encourage peace and love, and are essentially non-violent. There’s a stigma of recreational use of a green plant (of which I’m capitalizing on for this pack) around them. Most hippies have left political tendencies, which you’ll certainly realize when listening to their tunes.

It’s sticky and dank. According to the brewery, this beer greets you with a pungent citrus blast, followed by a spicy, yet round middle, and finishes with a brisk, clean bitterness — and it does. It’s rumored that an earlier beer by Oskar Blues was intended to be named after a sticky green plant. However, upon having the name shot-down by the TTB during label review, the brewery began to incorporate a screen on every can label in homage.

Though this is probably more for a rastafarian pack, most hippies I know also like a bit (or should I say “a lot”) of reggae. And what’s more reggae than Jamaica Red? Mad River originally brewed this amber ale for the annual Reggae Festival in Humboldt County. Pour yourself one of these while you’re listening to the old white hippie beat the tribal drums.

Originally packaged as Hemp Ale, but the label that ships into Washington state says “Humboldt Brown, brewed with Hemp seeds.” Though most hippies are either wearing their hemp or hanging their plants in it (I wonder whatever happened to all those macrame plant holders I knotted in the mid-70s?), this hemp’s for drinking. The seeds have “…a pleasant nut-like flavor and creamy texture” and are “nutritious and delightful,” according to Bob’s Red Mill. From what I understand, Firestone Walker toasts the hemp seeds used in this brown ale to add to the creamy mouthfeel, nutty and earthy notes.

This beer comes from WEED, California — and Mt. Shasta Brewing Co. makes no apologies for its town’s name. Instead, capitalizing on it, with the bold “Drink Legal Weed” on every cap and a tagline of “Celebrate Weed!” But the beer, man, the beer… This one is dank with Centennial and Simcoe hops, perfect for a mountain-high trip to hop heaven.

Pronounced “Doo-bee”, this beer comes from the unsuspecting state of Utah. It’s an imperial black IPA brewed with hemp seeds. The result is layered flavors, deeper and much darker than your average hippie’s thoughts. Uinta Brewery says they named this beer “…after Utah’s Centennial Star, a star classified as a Red Giant. Dubhe, the star, appears orange in color, and is found at the top end of the big dipper’s spoon. The beer is as black as the night sky and is brewed with an astronomical amount of hops.”

Originally The Kronic, but once the TTB realized what the name inferred, it became The Censored. Of this rich copper ale, Lagunitas (pronounced “Lah-Goo-Knee-Tuss”) Brewery says, “The original name of this original ale was originally derived from an origin so heinous that we cannot reveal its aboriginal oregeny. sorry. Actually, it’s an easy drinking malty Copper Ale that goes easy on the hops. Whatever.” And the beer? It’s German Altbier goes West Coast USA. Utter bittersweet goodness: caramelly malts meet citrus-pine hops in a sticky-sweet broth.